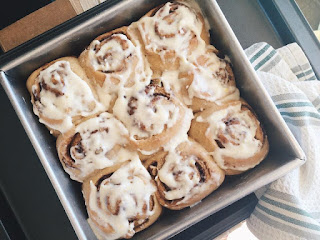 LA is finally feeling like it's November, and the baking bug in me is full on activated with this chilly weather.

Let's start familiarizing myself with yeast again! I almost forgot how fun bread making is. It's especially rewarding with the long anticipation- in this case, overnight. The dough rises for 2 hours and gets left alone in the fridge overnight. The next morning/day, roll and give it another hour to double in size and bake!

Spiced with cardamom and cinnamon and finished with an orange almond glaze, these cinnamon rolls are special (& very much Fall appropriate). 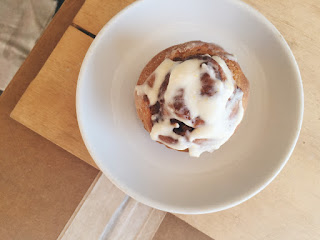 The night before:
1. Measure and mix dry ingredients for dough together in a medium bowl or container.
2. Measure and mix together wet ingredients in a separate bowl, then stir into the dry ingredients until completely incorporated.
*I used my stand mixer and let it mix with the dough hook on low for 5 minutes.
3. Dough will be very moist and thick.
4. Cover loosely, set in a warm area, and let rise for 2 hours.
*I turned the dough into an oiled bowl to rise.
5. After the 2 hours, cover bowl or container tightly and place in refrigerator overnight.
*The dough rose 50% after 2 hours; left to rise for almost 5 hours to double.


The next day:
1. Remove dough from refrigerator.
2. Mix together ingredients for the filling and set aside.
3. Dust a work surface with flour.
4. Remove dough from container and form into a round, then flatten into a small rectangle.
5. Dust work surface with more flour, and roll the dough, working out from the center, into an 18-inch by 12-inch rectangle, with the long side of the rectangle facing you horizontally.
6. Spread the filling evenly over the dough, pressing down lightly, and leaving a 1/4-inch border around the edges of the dough without filling.
7. Begin to roll the long side of the dough towards you into a cylinder, using a plastic dough scraper to lift the edges of the dough as you roll, being careful not to roll too tightly.
8. Continue to roll the dough until it forms a cylinder.
9. Make a cut in the length of the cylinder every 2 inches, creating 9 separate rolls.
10. Butter an 8-inch by 8-inch square pan and place the rolls in the pan, spacing evenly, three to a row.
11. Press down lightly on each roll to flatten the top very slightly.
12. Cover with plastic wrap and place in a warm area. Let rise for one hour until rolls are very puffy and crowding each other in the pan.
*Mine took about 1.5 hour.
13. Remove the cream cheese from the refrigerator so it can soften while the rolls rise.
14. About 15 minutes before the rolls are finished rising, preheat the oven to 350ºF.
15. When the rolls are done rising, place in oven on center rack and bake for 25 minutes, rotating pan 180º degrees halfway through the baking time.
16. Remove from oven when the top of the rolls are lightly browned.
17. While the rolls are cooling slightly, mix together the ingredients for the glaze, whisking until smooth.
18. Once the rolls have cooled for 10 minutes, scoop about a tablespoon of glaze on top of the center of each roll, spreading it over each roll as you go, until entire pan is covered.


With the yeast doing most of the work in bread recipes, I wamted to make sure my yeast is alive or that I won't be killing it. I had active dry yeast instead of the instant yeast that the original recipe calls for. I combined the yeast with the warm water in the recipe, and it ended up just dissolving with no bubbles formed. I proceeded anyways since the yeast was newly bought.. and I probably needed sugar to feed the yeast?

Not sure if it's the inactive yeast or the cold weather, the first rise took almost twice the time. I left it out even longer after it doubled, not knowing that overproofing is bad until 5 hours later.

I like to think that the dough was perfectly proofed.. The next morning, I did the "poke" test. If the dough was proofed correctly, it should shows a slight spring. Mine didn't. 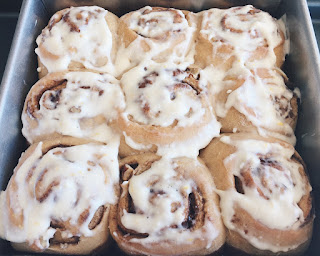 I went on with rolling and shaping anyways, and after an hour and a half, the dough puffed up just enough to be "crowding." 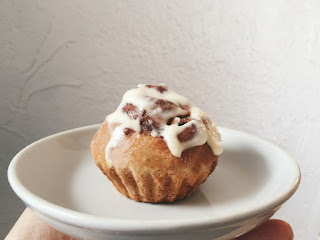 The cinnamon rolls turned out decent despite all the possible mishaps.. probably not its fluffiest version, but it'd do. The rolls stayed soft even overnight in the fridge. With a quick toast in the oven, they were excellent with a slight crunch in the exterior. 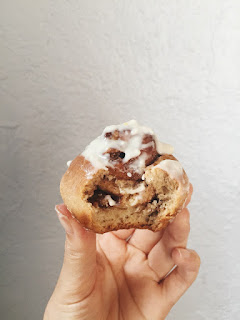 Cardamom is a very aromatic Indian spice with floral notes. The taste of cardamom in this recipe is prominent without being overwhelming. I also added some pecans because why not? I'd leave those as is and lower the salt next time. The dough and the glaze were both on the salty end.