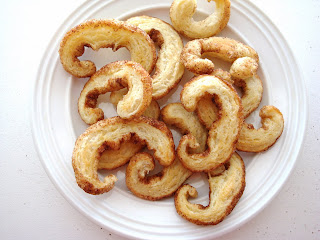 Puff pastry never fails to impress. I had my first encounter with puff pastry when making them Portuguese custard tarts yesterday (Pictures and recipe coming soon). No doubt that they would make a good tart, but now lets talk about what I did with the scraps!

With the leftover puff pastry from making the custard tarts, I created some Shiitake mushroom looking Palmier. It was intended to look like regular Palmier with the pretty butterfly shape, but somehow the pastry didn't stick together and opened up during the baking process..

Thaw puff pastry in room temperature for 30 minutes or until softened.
Preheat oven to 400F.
Grease or line baking pan with parchment paper.
(If using scraps, roll them back into a sheet.)
Sprinkle cinnamon and sugar on one side of the puff pastry.
With a rolling pin, lightly roll and press cinnamon/sugar to the puff pastry.
Flip to the other side, sprinkle and roll.
Roll each side of the puff pastry inward until the two sides meet.
Gently press the two sides together.
With a sharp knife and gentle sawing motion, cut the log into 1/2 inch thick pieces and place on baking pan about 1 inch apart.
Bake for 10 minutes or until golden brown.
With a tong or chopsticks, flip Palmier 5 minutes into baking to evenly brown each side.
Cool and serve. 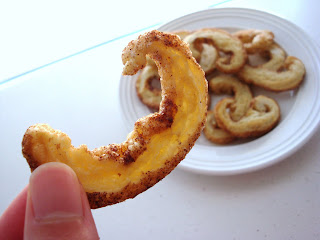 And so I ended up with some interesting looking palmier. Nonetheless, puff pastry tastes great in any shapes and forms. This is certainly going on my To-Bake list. I can't wait to try making some savory Palmier. Sun-dried tomato with pesto or cheese and ham? I give these 4.5 stars out of 5. It's not 5 out of 5 because I know my Homemade puff pastry will be better(: