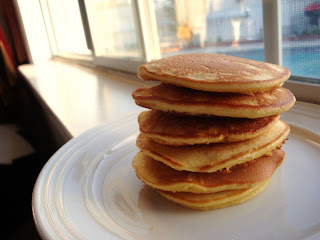 Dorayaki is simply pancakes with honey added to the batter (correct me if I am wrong). They are sweet and moist and go wonderfully with red bean. I made red bean- whipped cream fillings instead of just red bean paste to give it a little twist. I personally like it more with the whipped cream because it adds a little fluffiness to the filling. Any fillings would go well with these dorayaki pancakes, i.e. ice cream!

Don't know if you can tell the difference between the following two photos.. but they were made with different recipes! First one with baking soda& second one with baking powder. 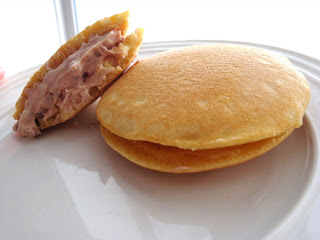 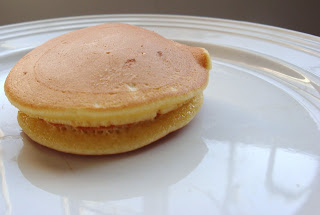 Which one's better? The one with baking powder! As you may see, the pancake in the second photo is fluffier whereas in the first photo, the pancake is thin on the edges. I am not sure if this has to do with the way I fried them.. But anyhow, the second time around, the pancakes also had a bit more "egg" taste to them(: 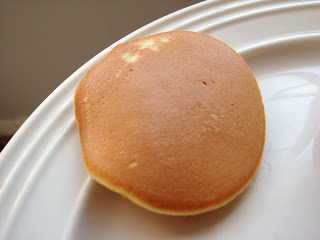 1. Beat eggs and sugar together until pale in color. Mix in the honey and water.
2. Sift in the flour and baking powder, mix together gently until no lumps remain.
3. Cover mixture with plastic wrap and chill for one hour.
4. Before frying the pancakes, mix the batter again. Adjust the thickness with water.
5. Heat a non stick frying pan over medium heat and brush on a thin layer of oil. Remove the pan from heat and place on the wet towel to cool down the pan. (I omitted the cooling part)
6. Pour batter into 9cm circles onto pan and cook the pancakes over low heat. (low heat helps with the smooth browning of the pancakes!)
7. When bubbles appear on the pancake, flip it and cook until slightly brown. Cool on a wire rack. Repeat with rest of the batter.

**Assembly: Sandwich a generous amount of fillings between the pancakes. Press lightly to even out the fillings and close the edges. 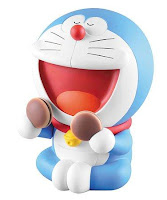 The only challenging and time-consuming part in making these is the frying process! It would be so much easier if I had one of those electric pan. ... but practice makes perfect.

NOMNOMNOM
Give it a try( :
Love, Eva
Email ThisBlogThis!Share to TwitterShare to FacebookShare to Pinterest
Tags: dorayaki, red bean