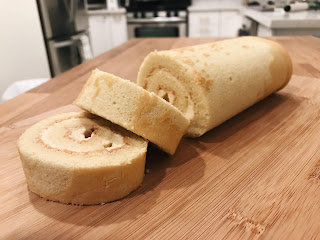 Making a swiss roll has been a daunting task to me. I was traumatized in the early days when I've failed miserably at it (Check out first attempt here). Cracks, uneven sheet, melting cream. I've been though it all. Every new year resolution since is to perfect a swiss roll, and years have passed with no new attempts. This year will be swiss roll year I promise.


Swiss roll is essentially made up of  a light sponge/chiffon cake and whipped cream, which on their own, I have no qualms about making. The crucial part is beating the whites to stiff peaks and folding the batter ever so gently, and the tricky part is spreading the batter evenly and rolling it after it's baked.

There are so many varying recipes and methods out there. Some suggest rolling the cake while it's warm. Some left it on rack to cool completely. Some recommend covering while it's cooling to avoid cake from drying out. I have yet to determine what is best for me and the recipe I am working with. This time, I sort of panicked and did a combination of all. 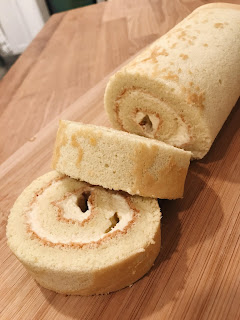 2. Mix in canola oil and water until smooth.
3. Add sifted flour and mix until no lumps.
4. In another bowl, beat egg whites. When bubbles are formed, add in 15g sugar. Keep beating until soft peaks form. Add in 15g sugar and continue beating until stiff peaks.
5. Fold egg white into egg yolk mixture 1/3 at a time until no more white streaks.
6. Pour batter in one spot onto lined pan. Smooth into even thickness and gently tap to rid of large bubbles.
7. Bake in preheated 350F oven for 15 minutes or until cake is spongy to touch.
8. Unmold and cool on rack. 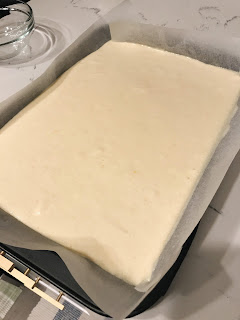 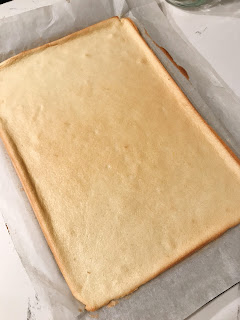 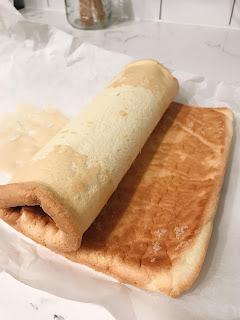 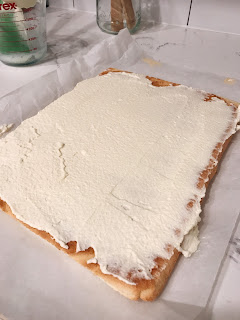 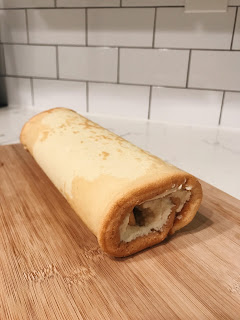 For filling, I just whipped up some heavy cream, leftover mascarpone cheese I had from making tiramisu and honey. 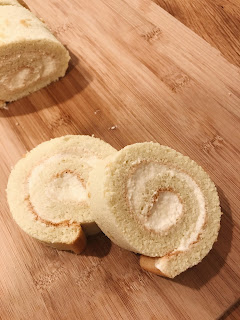 Taste: 4 stars out of 5
Could use a little vanilla and salt to flavor next time
Texture: 5 stars out of 5
Light fluffy and spongy; easy for rolling
Appearance: 3.5 stars out of 5
Nice even thickness, however, the outer layer peeled off as I was rolling; will try cooling the cake more before flipping on to another parchment paper 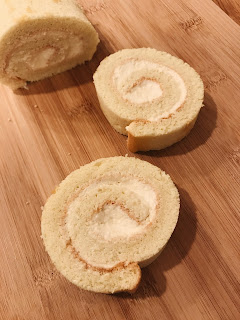 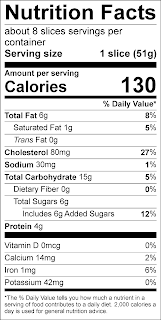