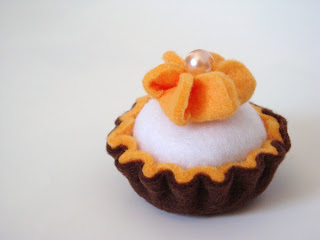 This one is technically felt and SHAMWOW food. :o
The "peach whipped cream" comes from a Shamwow towel. Hehe.

I was so disappointed with my trip to Wal- mart. I know they won't have the specific wool- felt I am looking for so I was just going to get some craft- felt anyways. Yes, they had craft- felt. But geee! Their color variety is like no variety. I ended up getting all the individually sold color they had which was only.. 4! They were the basic colors.

For this peach cream tart, I learned to make WHIPPED CREAM(: I found two ways to make whipped cream and this was the easier one with less stitching. It looks pretty cute I think. The pearl makes it shine a little, no? :p The crust was desired to be two layers of different shades brown. But sigh! No choice. I subbed it with the shamwow for the lighter shade and it looks acceptable? One critique I got was the white filling looks too fake.

Until I make a trip to Joanns or Michael's, you will be seeing a lot of the same color interchangeably used.
Love, Eva
Email ThisBlogThis!Share to TwitterShare to FacebookShare to Pinterest
Tags: craft, felt food, tart