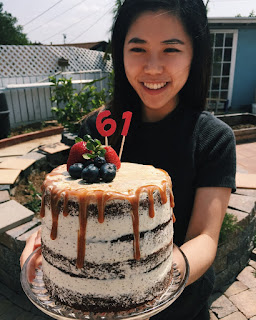 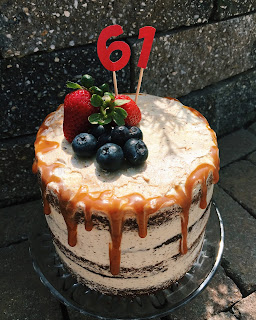 I can gawk at naked cake for days on (especially with the flood on my instagram feed). Seriously, they are like a piece of edible art! When I saw the post on a London Fog Layer Cake, I knew it's my time! I love Earl Grey, and the idea of infusing Early Grey into a buttercream.. ohmygawd!!

This seemingly taunting task was divided into two days over the Memorial Day long weekend. The first day was dedicated to cake and salted caramel sauce, and the second day was for buttercream and assembling. Making the cake was straight forward and a breeze with the help of Chio aka my stand mixer. As usual, I lowered the sugar as well as the salt. I also subbed 10oz of the AP flour with 3oz of cake and 7oz of white whole wheat flour mainly to use up what I had on hand. 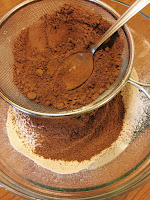 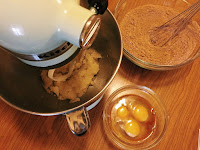 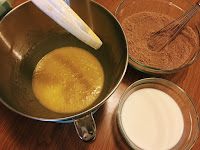 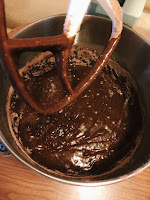 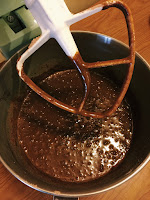 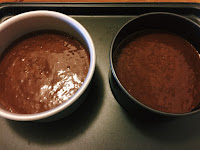 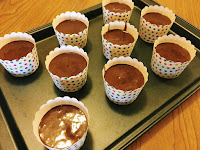 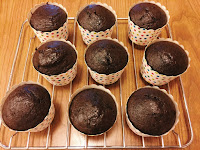 I had my first stumble with the salted caramel sauce. I didn't have corn syrup on hand so I subbed it with water. Everything seemed to be going smoothly until the cream was whisked in and the sugar quickly crystallized and clumped up! After a quick trouble shooting, I learned that corn syrup was suppose to help prevent this from happening, as well as having room temperature heavy cream. Tossing everything out was not an option for me since I hate wasting. I warmed the big clumpy mess on low and whisked until it came back smooth. Phew. The caramel sauce turned out well and was not a bit gritty. 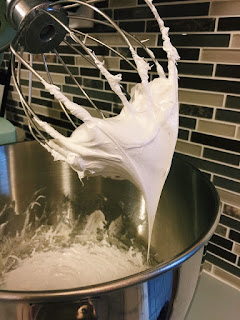 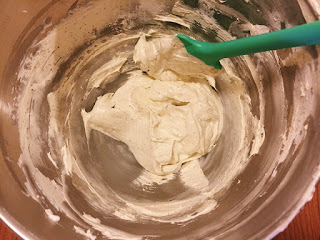 The swiss meringue buttercream was the most troublesome. Heating the egg whites to 160F was impossible! I must've stood by the double boiler whisking for a good hour, and the whites were still only registering 130F. It definitely did not seem right when my egg whites were cooking/crusting on the side of the bowl, and I am still whisking. When the whites turned thick and still not at 160F, I proceeded on to the stand mixer. Everything actually turned out fine at the end despite the nail biting and doubtful moments. The buttercream was lovely with its light and fluffy texture. 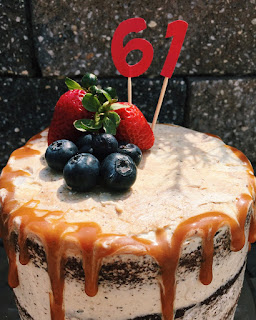 For the Classic Chocolate Cake:

1. Preheat over to 350 degrees. Grease and flour three 8-inch cakes pans and set aside.

2. Sift together the flour, cocoa powder, baking powder, baking soda, and salt and set aside.
3. In the bowl of a stand mixer fitted with paddle attachment, beat together the oil and sugar on medium speed for 2 minutes. With the mixer on, add the eggs, egg yolks, vanilla, and almond extract. Stop the mixer and scrape down the bowl.
4. Turn the mixer to low and add the flour mixture in three batches, alternating with the milk, beginning and ending with the flour mixture. Stop the mixer and scrape down the bowl. With the mixer on low, stream in the coffee. Mix on medium-low for no more than 30 seconds, or until combined.
5. Evenly divide the batter among the prepared pans. Bake for 23 to 25 minutes, or until a toothpick inserted into the center of the cakes comes out clean. Let them cool on a wire rack fro 10 to 15 minutes before removing the cakes from their pans.

For the Earl Grey Buttercream:


1. Place 1 cup of the butter in a saucepan with the loose tea. Heat over medium heat until the butter melts, then reduce the heat to low and simmer for 5 minutes. Remove from the heat and let the tea steep for 5 minutes more. Strain the butter through a fine mesh sieve set over a bowl and refrigerate it until is reached the same consistency as softened butter, 20 to 30 minutes. Small bits of tea may remain in the butter.
2. Place the egg whites and sugar in the bowl of a stand mixer. Whisk them together by hand to combine. Fill a medium saucepan with a few inches of water and place it over medium-high heat. Place the mixer bowl on top of the saucepan to create a double-boiler. The bottom of the bowl should not touch the water. Whisking intermittently, heat the egg mixture until it registers about 155-160 degrees on a candy thermometer or is hot to the touch. Carefully fit the mixer bowl onto the stand mixer.
3. With the whisk attachment, beat the egg white mixture on high speed for 8 to 10 minutes, until it holds medium-stiff peaks. When done, the outside of the mixer bowl should return to room temperature and no residual heat should be escaping from the meringue out of the top of the bowl. Stop the mixer and swap out the whisk attachment for the paddle.
4. With the mixer on low speed, add the vanilla, tea-infused butter, and 1 cup butter, a couple tablespoons at a time. Once incorporated, turn the mixer to medium-high and bet until the buttercream is silky smooth, about 3 to 5 minutes.

For the Salted Caramel Sauce:

1. Place the sugar, corn syrup, and water in a heavy-bottomed saucepan. Stir to combine.
2. Heat over high heat, occasionally swirling the pan, until it turns a medium golden amber color (about 8 to 10 minutes). The sugar mixture will begin to rapidly boil before slowing down and darkening in color. Remove the saucepan from the heat once the correct color is reached and the bubbles start to subside (the darker the color, the deeper the caramel flavor).
3. Slowly and carefully whisk in the cream.
4. The mixture will foam up and sputter, so stand clear and keep stirring.
5. Add the butter and continue to stir until melted. Add the salt and vanilla and stir to combine. Pour the caramel into a heat-safe container and let it cool until it reaches your desired consistency or refrigerate until use. It will thicken as it cools.

1. Place the bottom layer of cake on a cake plate or serving dish. Spread on about ½ to ¾ cup of the buttercream with an offset spatula. Top with the next layer of cake and repeat.
2. Frost the cake with the remaining buttercream. Using an icing comb to crate the stripe finish (if desired) and refrigerate until set, about 15 to 20 minutes.
3. Pour caramel sauce over the chilled cake, starting with about a ½ cup, letting it drip over the edges. Add more caramel as necessary. 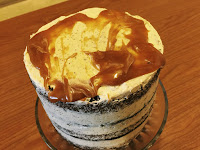 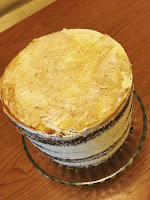 Note:
- Instead of three 8-inch cakes, I baked my cake in two 6-inch cake pans and had 9 additional cupcakes. I halved each of the 6-inch to make 4 layers.
- Sugar for cake was lowered to 10oz (282g), and salt was lowered from 1 tsp to 1/2 tsp.
- 6-inch cakes baked for 35-40 minutes, and cupcakes baked for 23-25 minutes.
- Ingredients for buttercream was halved except for tea to make a half batch; half batch was enough for a naked layered 6-inch.
- 1/4 cup loose leaf Earl Grey tea weighs about 12g; 5 Tazo tea bags were used.
- Sugar for buttercream was lowered to 100g.
- Salted caramel sauce recipe was halved; 1 Tbsp light corn syrup subbed with 1 Tbsp water; skipped vanilla.
- Warm caramel sauce before pouring over chilled cake; my attempt was not successful and I ended up just dripping them on the edge. 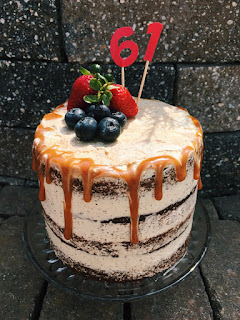 I am pleased that my first naked cake attempt turned out both palatable and presentable. My nit picky parents appreciated the work I put in but preferred the lighter fluffier Asian sponge cakes. To me, the cake was a bit dense and had a coarse crumbly texture (possible due to the whole wheat flour I sub). The buttercream was tasty but could use a stronger tea flavor especially when paired with chocolate cake.  The layer could also be thinner to have a better ratio of cake to cream. 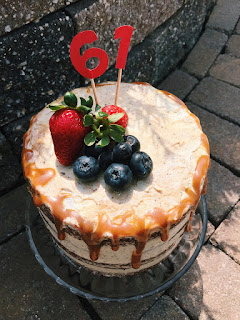 UPDATE: the smaller cupcake turned out really moist and soft; the layered cake was coarse and dry probably due to open refrigeration/ exposure to air. 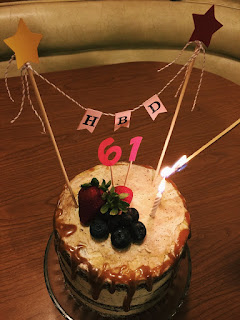 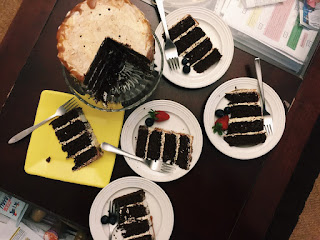 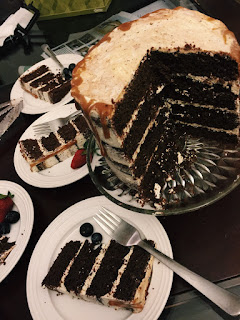 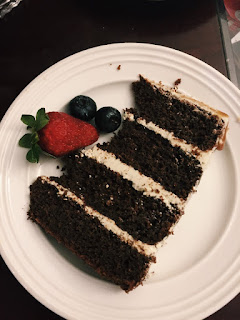