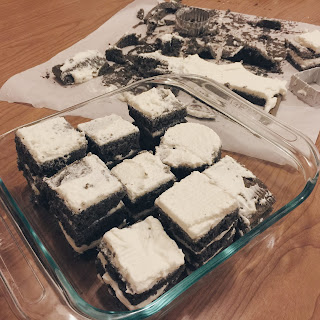 While most fear the making of macarons, I intensely fear the seemingly simple but extremely difficult swiss rolls.

I love swiss rolls. Growing up, swiss roll was one of the more indulgent items I get to have from Asian bakeries. It's cake in a portable and breakfast-friendly form. Swiss roll has a special place in my heart. It brings me back to the middle school days, and also recent years when I would go to the bakery with my mom and buy swiss rolls scraps at a discounted price.

So far, my attempts at swiss rolls have led to THREE fails and ONE success. That's a pretty low success rate, and the one time success was barely passable. Why does youtube make it everything look so easy?

Let me tell you what happened and also keep this as a reminder to myself to not make the same mistakes.


1. Line a jelly roll pan or deep baking dish with parchment paper. Prepare a clean tea towel and sprinkle powdered sugar over it. Set aside. Preheat oven to 400F.
2. Sift together cake flour, baking powder, and salt. Set aside.
3. Whisk together egg yolks, sugar, black sesame paste, and milk until pale yellow and thicker.
4. Whisk egg whites until foamy but stiff peaks form and stay in shape.
5. Add flour mixture to yolk mixture and fold until combined.
6. Add 1/3 of the egg whites and fold until just combined. Add another 1/3 and fold. Add the final 1/3 and fold. The texture should be light but not fluid like water. It should be thick.
7. Spread batter into prepared baking sheet.
8. Bake for 7-8 minutes, until toothpick test comes out clean.
9. Run a knife around the edges of the pan to loosen the cake. Invert onto your prepared tea towel. Gently remove parchment paper. Gently roll, starting from the shorter edge, to create a loose roll. This shapes the cake without causing any cracks.
10. Cool completely to room temperature.

1. In a cold bowl, whip cream until stiff peaks form. Fold in honey. Cover and chill in fridge.

To assemble roll cake,
1. Gently unroll cake roll when it is at room temperature,  Spread whipped cream across the surface.
2. Tightly roll starting from the shorter edge.
3. Wrap and chill for at least 1 hour.

Things usually goes wrong as I spread the batter onto the baking sheet. Either my baking sheets are never the right size, or the batter is always suppose to be paper thin.. Anxiety kicks in and doubts about whether just turning it into a chiffon cake surfaces. 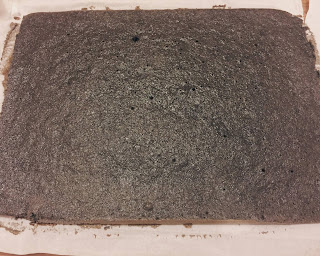 The cake still managed to rise despite the thin layer and excess handling. However, the center was noticeably thicker than the sides. Being super careful not to overbake, I checked for doneness with a toothpick every minute after the 5min mark. Clean toothpicks and a light spring to touch were the cues that the cake was finally done at 7min.

Some suggest flipping the cake on a tea towel dusted with powdered sugar after it's done, as well as rolling it to prevent cracks after it's cooled. I decided to deviate and just let my cake cool in the pan covered with a bigger pan to not lose moisture. I went on to make my whipped cream while the cake was left to cool.

Feeling excited that everything was promising thus far, I flipped the cake onto a separate parchment paper and rolled it in to a log. The cake was flexible and did not crack! 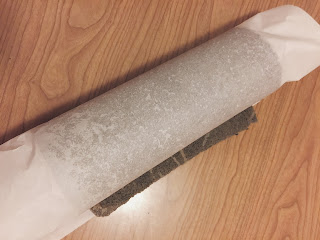 I took my chilled cream out, dropped the first dollop on the cake, then realized I forgot to flip back the cake. "Oh wells, it's just aesthetic right?" was the passing thought. 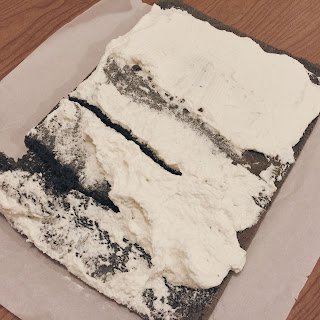 The top side which was now facing down on the parchment paper was.. STUCK! It was so moist that as I attempted to roll, it cracked. Worst nightmare.. so close to finishing yet one little thing ruined it all. 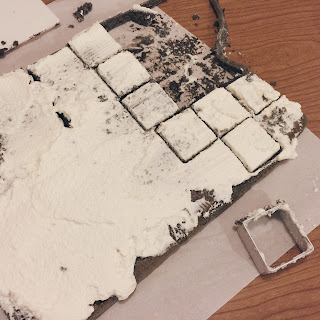 Lessons to be learned:

At least, I don't think I am making the same mistakes with each attempt. The very first time I spread cream on a hot cake..