With the saved crust dough from fig frangipane tart, I made NUTELLA pudding tart! 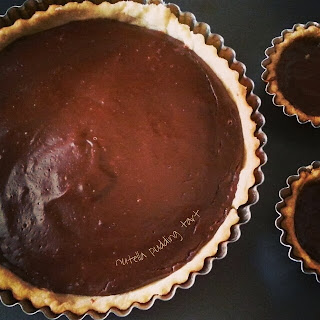 1. Whisk starch with some of the heavy cream.
2. In a saucepan over low heat add rest of heavy cream, nutella, vanilla and salt.
3. Whisk in the starch cream mixture from step 1.
4. Bring it to a boil while whisking (turns thick pudding/custard like).
5. Let cool for 10 minutes.
6. Pour into pre- baked crust and bake at 300F for 25 minutes.
7. Take out of oven and let rest for 20 minutes.
(I put mine in the fridge overnight and served chilled the next day!)

Crust
Move the dough from the freezer to refrigerator the night before baking and leave at room temperature for 10-15 minutes before rolling. The crust after freezing was less oily than the fresh made ones. It was still very buttery and flaky and yummy!

My mom commented on the tart saying it tastes like a chocolate egg tart! I am surprised the filling solidified pretty well from starting with just cream. It was perfectly sweetened with the nutella itself and no extra sugar needed at all. I would definitely make this again! Very simple ingredients and steps.


Next time- the tart could probably use some nuts and powdered sugar to make it look prettier.