This weekend was my trip with FIMRC to Los Angelitos Orphanage in Tijuana, Mexico. (Whee!) Just the weekend before, we had a pre-meeting about the tasks we are doing. And guess what? My obsession with food got me into the food group! So the day before the trip, I met up with the other girls/guys to prepare for the lunch and dessert for the kids and us (around 40 people?). They had already decided on making pasta and chocolate covered bananas, and the girl who was in charge went to costco and bought all the ingredients.

We started off the night by chopping 6 big onions for the pasta. Thanks to my contacts, I was the only one who wasn't tearing. After spending a good 2 minutes on my first onion, I thought of the little trick that the "cooking with the dog" lady uses to cut her onions in all her videos. Unfortunately, it didn't quite work out for me simply because I forgot how she did it exactly. I sliced the onion in half.. then sideway? and straight?

Anyways, then all the chopped onions went into a pot, seasoned and cooked till translucent. A huge pack of ground beef went into another pot. After everything was cooked thoroughly, we just simply mixed the beef, onion and marinara sauce. Then we boiled pasta, poured onto the three trays we had prepared. Mixed the sauce with the pasta and finished off with layers of mozzarella cheese. 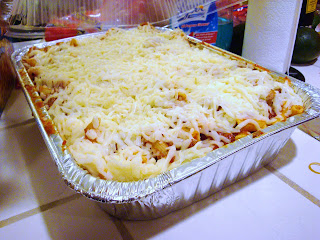 We baked them again on the site to melt the cheese. They came out delicious.. honestly wayyy more than what I had expected. (:

After spending a good hour on the main dish, we moved on to making the dessert, chocolate dipped bananas. It was a disaster! Not only was it a mess .. they also didn't store them properly for the next day (Wrapping in foil= don't). It was my first time making chocolate dip so I just went with the flow. 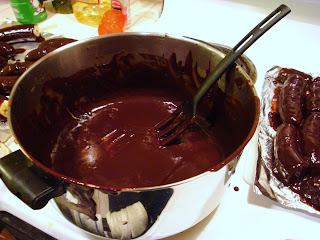 The girl who made chocolate dip before took the lead and poured a bag of semi-sweet chocolate chip along with some half½ in the pot.. Stirred on low heat till everything melted. Up to this point, the chocolate dip was okay.. but UH-OH! she added in the store-brought chocolate dip pouches. They were pretty gross in my opinion. There was a thick layer of oil in each pouches (she added three. oilx3!). 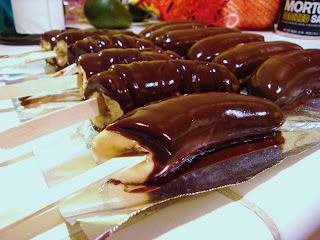 The consistency of the dip got thinner and thinner toward the last few bananas. In my mind, they weren't even chocolate covered.. more like OIL-covered. 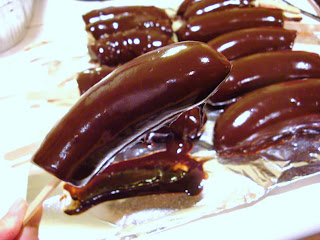 Oh! And moreover, the lack of preparation (wax paper) led to PAM covered foil. I mean.. it makes sense to add oil to foil so things do not stick. But chocolate covered banana on pam! Seriously? Oil times infinity.

I think we should've just bought the chocolate rice krispy treats that the girl made for herself. Even though I didn't see how she made them, I am sure is much more pleasing than the oil infused bananas. 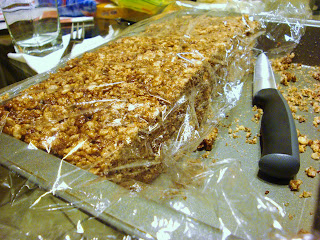 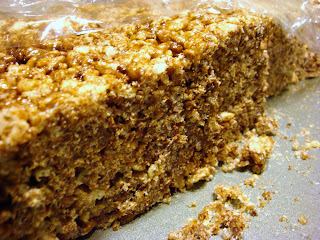 The night was so long and uh.. interesting. It reminded me so much of the food show I recently started watching- Jamie Oliver Food Revolution! I think I won't mind catering for people as my career. It's both tiring and rewarding.

At the end of the day, I confirmed that I hate working with others in the kitchen. If I was the lead or doing this by myself, I would do things so much different, such as washing the onions prior to cutting. My OCD is definitely kicking in. It is just frustrating when people don't do things the way I want. Alright alright alright.

On a lighter note, my friend asked me to make a birthday cake for his sister next week. We'll see how that goes(:
Love, Eva
Email ThisBlogThis!Share to TwitterShare to FacebookShare to Pinterest
Tags: chocolate covered bananas, pasta, rice krispy treat