I was debating whether I should post this. But hmph.. I guess this blog is about keeping track of how I have progressed over the years so this needs to be a part of it-- my semi-failed and messy attempt at swiss roll. Ehh.. it just wasn't a good day for me to bake (my attempt at bread that day failed as well).

My fiasco..
First, this recipe called for 1 whole egg and 3 separated eggs and I mindlessly separated all the eggs. Well, no big deal right? I just had to scoop a yolk and some egg whites out of the bowls to get back my whole egg. Then! Given my mishap with over beating the egg whites last time, this time I "under- beated" it. The batter came out really runny and thin and there was no way it could be piped like the recipe asked for. I skipped the pipping step and just scooped the cocoa mixture in and baked the batter anyways. The cake came out ..... Before I get to that, let me also mention that I messed up on evening the batter on the pan. (After baking) The corners of the cake were noticeably thinner than the center and some were thin to the point that they just cracked off. Major fail. 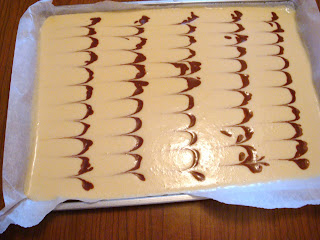 While the cake was in the process of baking, I was bothered by the watery batter and decided to you-tube some swiss roll tutorial. As expected, their batter were definitely not as thin as mine. Most of them were thick enough so that you can scrap and even them on the pan.. At this point, I was still hoping for some miracles to happen to my sponge cake. The top of the cake came out looking alright.. nicely browned. However, the bottom side (the side attached to parchment paper) was a tragedy. It was wet and moist looking. It was glossy and sheen. Absolutely no visible pores like that of a sponge cake.

I think I unconsciously gave up on the cake when I know the batter was way too thin to begin with. RIGHT after I took it out of the oven, I flipped the cake onto a parchment paper and attempted to cream it. Oh boy.. what was I thinking? The whipped cream melted instantly. I quickly scraped the melting whipped cream off and wiped the cream liquid left on the cake with some paper towels.. This was when it became super messy. The melting whipped cream got onto everywhere, so I decided to put the cake onto a new parchment paper. UH-oh. The top was... ruined. 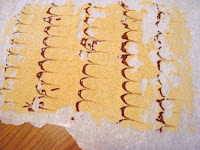 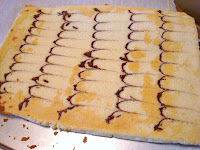 FAILED FAILED FAILED! I transferred the sponge cake onto a cooling rack after and let it cool for a good amount of time before I creamed and rolled again. A good explanation to my absurd action is the lack of planning. I am not yet experienced enough to act on common baking sense and impulses. I thought the cake needed to be pre-roll immediately after taken out of the oven. I should have known better to at least slightly cool it first. ):

It would be fine if it was egg-y AND fluffy! The texture was nothing like a sponge cake. It was extremely firm and tight? Not fluffy and airy at all. 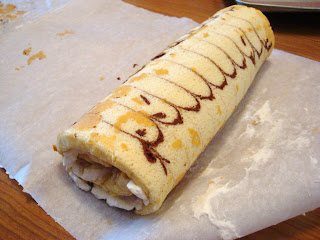 It's not a complete fail because I still got my dad to finish this cake off for me. Hehe. He said it wasn't too bad and it was still edible. I am going to go with a chiffon cake based swiss roll next time.

---update!
I gave the cake another try after it has been chilled in the fridge for a day. It's not too bad actually. The egg-y taste was less prominent. 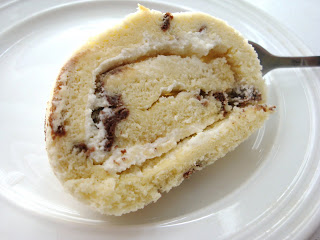 ^not pretty ): The cake broke as I was rolling it.. that's why the center is one whole chunk instead of a nice swirl.
Love, Eva
Email ThisBlogThis!Share to TwitterShare to FacebookShare to Pinterest
Tags: chocolate, cream, sponge cake, swiss roll