Honey Mochi Donut! The idea of making donut with mochiko or rice flour is so inspiring! I've made mochi cupcakes before and those turned out perfectly chewy and delicious! But ahh.. what an ingenious idea for donuts too! I love mochi. And I just got a donut pan that is screaming "use me! use me!" This is the perfect recipe to try out with my new donut pan. 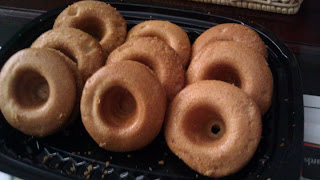 1. Preheat oven to 350F.
2. Whisk together the beaten eggs, honey, sugar, and milk until well mixed.
3. whisk in the mochiko and baking powder until combined.
4. Finally, whisk in the butter.
5. Pour the batter into donut baking pan.
6. Bake the donuts for 20 minutes. Remove from the oven and let cool slightly. Gently run a butter knife around the edges of each donut to loosen them in the pan, then turn them out onto a cooling rack. Top the donuts as desired. 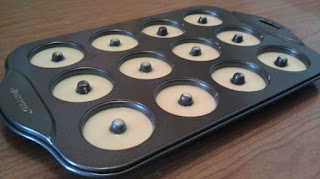 I halved the recipe since I only have one mini donut pan at the moment and was too lazy to bake two batches. I made 12 mini donuts and bought them to a potluck. I only got to eat one when I was at the potluck.. By the time for my second round of food, the mochi donuts had disappeared! The donut was not overly sweet and definitely is a healthier alternative to the fried version. I especially like the hint of honey sweetness that comes out from the donut and the chewy mochi texture of the donut. However, I think it's missing a nice crunch. It would be divine if these donuts were crunchy with a soft chewy center. Also, my donuts did not come out as pretty as I would like since I think I overfilled them a little.. I would make sure I take note of that when I make these again soon!

Taste: 5 stars out of 5
Texture: 4 stars out of 5 (missing a nice crunch)
Love, Eva
Email ThisBlogThis!Share to TwitterShare to FacebookShare to Pinterest