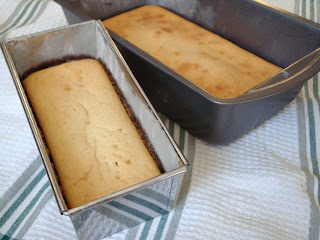 Sour Cream Pound Cake
recipe from vondelicious
- makes a 8x4x2 inch or 9x5x3 inch loaf pan
(I wanted to try out my new mini loaf pan from Daiso. That's why I separated the batter into two pans and resulted in ultra thin pound cakes)

1. Allow butter, eggs and sour cream (or yoghurt) to stand at room temperature for 30 minutes. Meanwhile, grease and lightly flour a 8x4x2 inch or 9x5x3 inch loaf pan; set aside. In a medium bowl, stir together flour, baking powder and baking soda; set aside
2. In a mixing bowl, beat butter with an electric miser on medium to high speed for 30 secs. Gradually add sugar, beating about 10 minutes or until very light and fluffy. Beat in vanilla. Add eggs one at a time, beating 1 minute after each addition and scraping bowl frequently. Alternately add flour mixture and sour cream (or yoghurt) to butter mixture, beating on low to medium speed after each addition until well combined. Pour batter into the prepared pan.
3. Bake in a 325oF (160oC) oven for 60 to 75 minutes, or until a wooden toothpick inserted near the center comes out clean. Cool in a wire rack for 10 minutes. Remove from pan; cool. 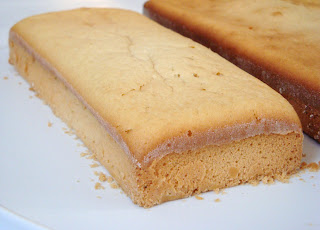 Who doesn't love Sara Lee's pound cake! Buttery. Smooth. Silky. Refined. Velvety. HEAVENLY! And how was my pound cake? Chewy. Firm. Rough. Sad. The inside of the cake looked and sort of tasted under- baked. ):

The.. one two things I am okay with about this pound cake is the strong egg-y taste, which reminded me of those paper wrapped sponge cake in Asian bakeries, and the crust. The crust has got to be the best part of this cake. It got a slight toasty taste to it. I simply love crusts of every sort. Maybe I should cut the crust off. Eat that. Re- bake it and get a "new" crust.. and so on. Haha? 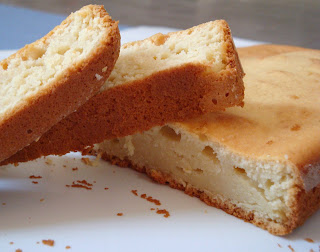 I am strongly suspecting that the sour cream has something to do with this mishap since my blueberry crumb cake, which also used sour cream, turned out on the chewy side. Maybe a Sara Lee- like pound cake can only be made with pure "pound" of butter? I don't know. I will find out when I get my hand on one of those recipe. Sara Lee's has the best pound cake in my opinion.

**EDIT: Over- beating the batter! That's my final verdict on the chewy end result. The directions asked for one minute of beating after each egg addition and extra beating after the flour and sour cream addition as well. At the time, I thought that was really excessive but I carried it out nonetheless because I have no better idea. DO NOT OVERBEAT A CAKE BATTER! WHY?

Overbeating the butter can soften it too much, which will diminish its ability to trap air.
Overbeating the eggs whips in too much air and creates tunnels in the cake.
Overbeating once the flour has been added, promotes gluten formation and toughens the cake.

Sorry, sour cream. I don't think it's your fault after all. I shall try this recipe out again with less and more careful beating.
Love, Eva
Email ThisBlogThis!Share to TwitterShare to FacebookShare to Pinterest
Tags: pound cake, sour cream