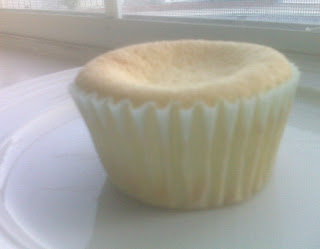 Steamed-baked cheesecake cups?! Another first for me(: I always loved the lighter Japanese Cheesecakes. And to have them in small cups is just the cutest thing ever!! These cheesecake cups came out really soft and fluffy. The center of the cakes tasted a little funny to me at first. Really Soufflé- like I should say. It was almost liquid like.. but not. Haha. Another melt-in-your-mouth dessert!

These are even lighter than the already light Japanese cheesecake. The cheese flavor is not really strong. Really.. healthy-tasting! lol. My dad ate two right after dinner! What a fatty 8) But yeah, woohoo~

I will definitely make this again and make sure I don't over beat the egg whites. I wonder what big of a difference it will make.. Maybe they won't shrink as much when I take them out of the oven? Yup.. do note that the center of these cups do sink down a little but that does not necessarily mean they are undercooked.. at least not in my case. They still taste fluffy without the "fluffed" top. 4 stars out of 5. 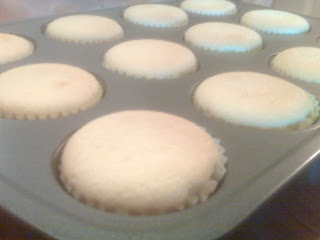 ^the moment before they started shrinking

1. Preheat oven to 300F. Line 12 muffin holes with paper cups. Place a large tray of hot water inside the oven just below the shelf where the cheesecakes are to be baked. (I preheated the oven with a large tray inside and pour water onto the tray as I put in the cheesecakes.) 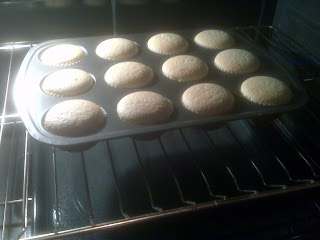 ^see the tray of water underneath?
2. Soften cream cheese with milk and oil in a bowl placed over simmering water, or in a double-boiler. Whisk until smooth, remove from heat and let cool until lukewarm.
3. Beat egg yolks with 40g sugar until combined, beat in lemon juice. Gradually whisk in cheese mixture to combine. Lightly whisk in sifted cornflour, mix well.
4. Beat egg whites until foamy. Then gradually beat in 70g sugar, spoonful by spoonful, until firm but just under stiff peaks stage.
(I think I went past the firm stage): So.. do not over beat the egg whites or it will be difficult to do step 5. *If you accidentally over-beat the egg whites, add one unbeaten white and whip again until stiff peaks form. Remove 1/4 cup of egg white.
5. Fold 1/3 of the egg white mixture into the cheese mixture until thoroughly mixed in. Repeat two more times with the remaining egg white mixture.
6. Spoon batter into the prepared muffin cups, filling each cup nearly to the rim.
7. Place the muffin tray on the shelf just above the tray of hot water.
8. Bake for 35-40 minutes, or until the tops of the cheesecakes are lightly browned. 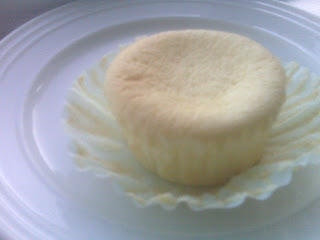 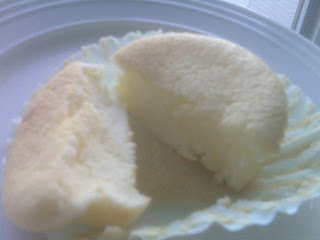 p.s. they taste great chilled overnight.. or if you want, pop them in the oven and you will get a slightly crunchy top!
Love, Eva
Email ThisBlogThis!Share to TwitterShare to FacebookShare to Pinterest
Tags: cheesecake, soufflé