After a long back and forth debate on which waffle maker and if I should get belgian or classic style, I welcomed home a very affordable Cuisinart Round Classic Waffle Maker. The Waring Double Belgian Waffle Maker was my second choice at three times the price. For the record, it was a very tough choice that took over a week long of weighing the pros and cons of each. All things including but not limited to price, counter space/storage, usage frequency, and waffles' taste/texture were taken into consideration.

I am quite pleased with Walter since these macadamia oil waffles turned out extremely crispy and light waffle! More over, Walter is super easy to operate, and the non stick plates work perfectly. I sprayed coconut oil for extra assurance on the first couple runs, but even the one or two times that I forgot, the waffles came right off with no trouble.

I found this delicious olive oil waffles recipe and simply replaced the olive oil with macadamia oil which I have on hand. This must be the simplest waffles recipe out there yielding "meltingly, crispily, fluffily perfect" results! 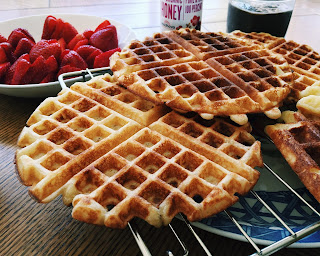 1. In a bowl, whisk together dry ingredients.
2. Add in egg, milk and oil, and stir together with a wooden spoon. Don't worry if batter is lumpy - do not overmix!
3. Bake waffles according to waffle maker instructions on medium-high setting.
4. Waffles should be nice and dark golden brown. Cool slightly on wire rack for waffles to get crispy.
5. Eat as is or serve with fruits or ice cream!

As you can see from the irregular shaped waffles, I was just eyeballing how much batter to pour in at first. Walter holds about 1/2 cup batter, and the following photo shows exactly that! Also, the Fatty and I discovered a neglected Salton's belgian waffle maker in his parent's kitchen and decided to play with that as well. The belgian waffle maker a.k.a. Belinda didn't have a heat setting and needed more time for the waffles to get crispy. The end results were equally tasty. 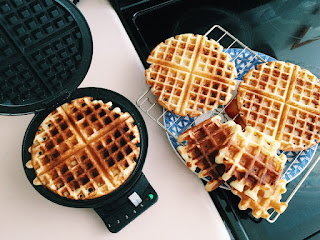 Enjoy these waffles anyway you want. We topped ours with strawberries, flaxseed meal, and a drizzle of honey along with a cup of acai smoothie on the side. 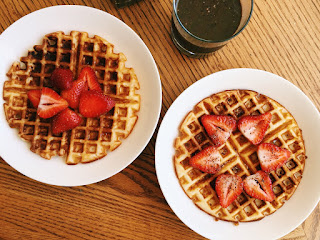 Weekends are for waffles and acai now! 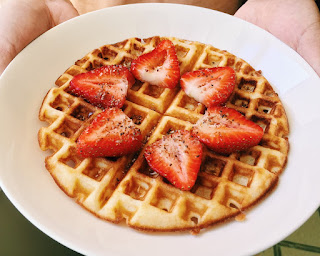 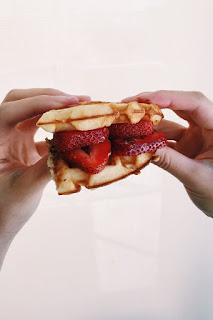