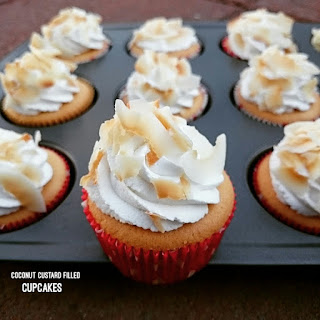 What can I make out of the leftover custard and cream? These gorgeous coconut custard filled cupcakes! The cupcake base rose beautifully, turned out light and airy, and complemented well with the creamy custard and cream. 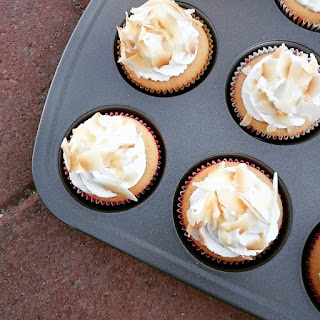 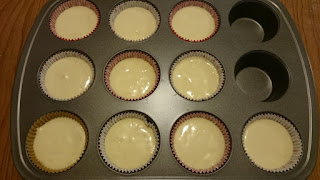 1. Preheat oven to 325F and prep 12 muffin cups with paper liners.
2. Sift together cake flour, 1/4 cup sugar, baking powder and salt.
3. Make a well in the center of the flour mixture and pour in oil, egg yolks, water, coconut water, and vanilla extract. Beat the mixture until smooth, about 3 minutes.
4. In another bowl, beat egg whites and cream of tartar until foamy. Slowly add rest of sugar and beat until whites are glossy and smooth.
5. Add whites in three portions to the batter mixture, folding gently until no streaks remain.
6. Pour about ¼ cup of batter into each muffin cup, should be about ¼-inch below the tops of the liner.
7. Bake for 25-30 minutes or until tops are golden and cupcakes test done with a toothpick.
8. Remove to a wire rack and allow to cool for 1 minute in pan. Remove cupcakes from the pan and rest them on their sides to cool completely.

The steps in making these cupcakes are very similar to chiffon cakes. I love chiffon cakes, not only because they taste great but also making them is very comforting since it's almost second nature now. 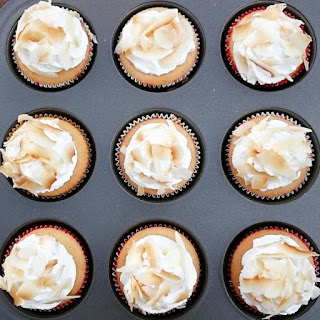 Instead of napping after waking up at 4AM and running a 10k, these cupcakes happened. The surge of adrenaline kept me from feeling tired till later in the day. 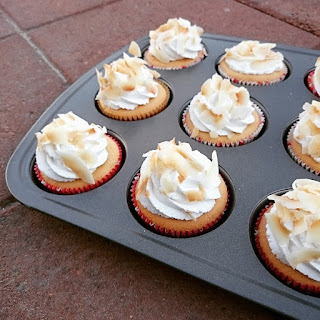 The end results were worthy, and I will probably play around with this recipe more.
Happy 26th birthday weekend, Fatty!