Super moist cream cheese filled banana bread with cacao nibs.
So moist I am doubting myself if I have under- baked this. 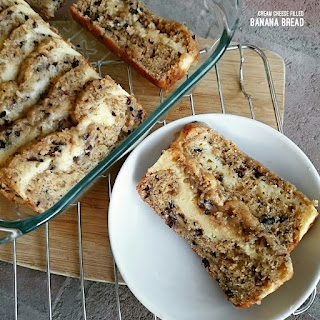 To date, I have baked a good amount and variety of banana bread. But, baking a layer of cream cheese into the banana bread is totally new to me. I was expecting a creamy, lava-flow like, tangy cheese layer but was met with a more solid, flour-y, sweet layer. On hindsight, I should've incorporated some graham crackers in (or on?) this banana bread to make it a full-on fusion of cheesecake and banana bread.

*Bread will keep airtight at room temperature for up to 1 week, or in the freezer for up to 6 months. 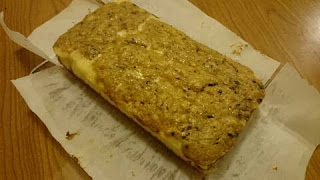 To be honest, I am disappointed with how this bread turned out. I had great expectations after seeing the photos of them and imaging the taste and texture in my head. 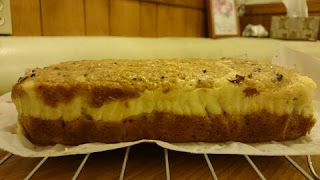 First of all, the top is not domed. A domed top makes all the difference.. At least to me, the bread is thousand times more appealing. I love a toasty hard crust. Next time, I want to try this recipe from Entertaining with Beth. Ah, just look at that domed top.. 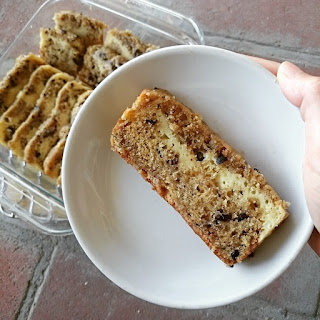 The sweetness was also a bit overwhelming and one noted to me. I omitted the original 1/4 cup granulated sugar in the batter and still found this cake to be too sweet for my liking. I should've taken into account of the over ripen (sweeter) bananas and the additional 1/4 cup in the cream cheese layer. If I ever make this again, I would need to reduce it more to make it breakfast appropriate and mom friendly. In addition, the cream cheese layer needed a bit more tang to highlight it. Some lemon juice or zest would help.

The spontaneous addition of cacao nibs, suggested by Ip Man, was nice and toned down the sweetness a bit (but not enough). 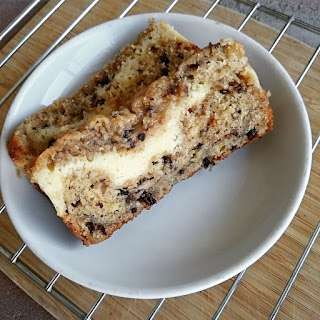 The texture of this bread was between moist and mush. The top half of the cake was a bit soggy and mushy, while the lower half was just right. I sprinkled turbinado raw sugar on top prior to baking hoping for a nice crispy crusty domed top, but well,, it didn't turn out quite as planned.