I blame the rainy weather! But ehh, macaron failures still taste pretty good! They just don't quite look as cute. 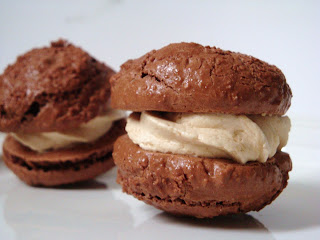 I actually never had a macaron before. I first discovered them on the food blog world a year ago and thought they are the most delicate and delicious looking little treat. And recently, my friend studying abroad in Europe reminded me of them again with her pictures of Laduree! (so jealous :x) They have been on my to- bake list for quite some time. I never got around to start on them though. But after spending a whole day reading every single post there are on macarons, I decided to embark on my very own macaron journey. :p

I knew it wasn't going to turn out as expected right away when I was adding the dry mixture into the egg whites. It was way too dry/rough/grainy! Definitely not the magma consistency others have noted ): I am suspecting that the dry mixture might not have been fine enough and thus over killed the egg whites.

Here's what I did and noted:
- I followed David Lebovitz's recipe.
- I separated my egg whites and left them out to age in room temperature for 2 nights. (They were the left over egg whites from my previous post- Pinwheel Shortbread Cookies)
- I oven-dried my almond flour to lose the moisture in them (350F for 3 mins).
- I sifted the almond flour, powdered sugar and cocoa powder 3-4 times.
- I added the dry mixture in 3 batches instead of 2 into the egg whites.
- I piped in a tip that was too small and piped in spiral which would have led to air escaping everywhere during baking.
- I used a macaron template that I found online so I could pipe consistent macarons.
- I used water to smooth out the top of each macarons before baking.
- I left the piped macarons out in room temperature for an hour before putting into the oven. (Some of them were still not completely dried to the touch when I put them into the oven.)
- I made an espresso buttercream to go in between the macarons. (Ganache might taste better?) 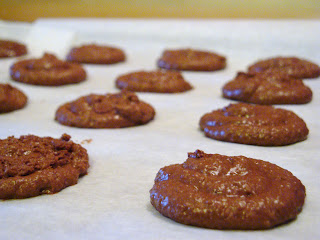 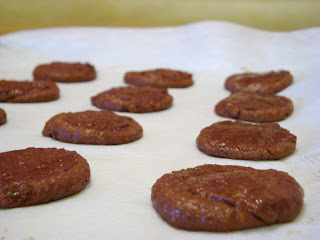 ^the ones with smoothed out tops

Here's what I will try to do next time:
-I might try Annie's Eat recipe next time. (Seems like more people have had success with Annie's.)
- Don't make them on rainy (humid) day! :p
- Use a food processor (if I have one by then) to grind the almond flour mixture.
- Use an extra egg white if they are small eggs. And measure out the exact grams!
- Use a bigger pipping tip!!
- Use my new silpat!

Ok. So on to taste and texture..
They were rich and a little overly sweet! They had a semi hollow center with a crunchy thin outer layer. I find them a bit chewy especially overnight. 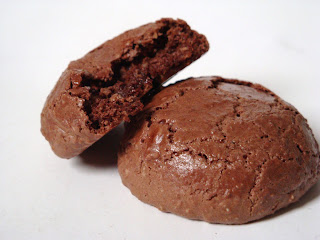