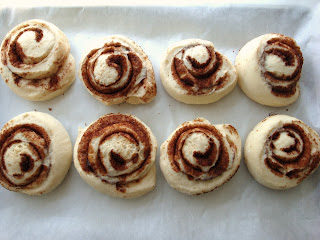 In a large bowl combine 1 1/2 cups of the all-purpose flour and yeast. Heat the milk, 1/8 cup sugar, 1/8 cup butter and salt just until mixture is warm (not hot) and the butter is just melted, stirring slowly.

Add milk mixture to flour mixture; add the eggs. Beat with an electric mixer on low speed for about a minute while scraping the sides of bowl constantly. Beat on high speed for 3 minutes. Using a spoon, stir in as much of the remaining flour as you can. Dough will be soft.

Turn dough out onto a lightly floured surface. Knead in enough of the remaining flour to make a moderately soft dough (3 to 5 minutes total). Shape dough into a ball.

*My dough was liquid-y and sticky even after more than 2.5 cups of flour. I stopped adding/kneading till I was at a stage where I can form a decent round shape dough that I can peeled off my fingers..

Place the dough in a lightly greased bowl & cover; let it rise in a warm place until double (about 1 to 1.5 hours).

Spread generously with 1.5 tablespoons softened butter. Combine brown sugar and cinnamon; sprinkle half over the stretched dough. Sprinkle the nuts/raisins if you are using them. Roll up from a short side.

Make a second roll with remaining dough, in the same way as above.

Slice each dough roll into 6-8 pieces.

Arrange slices, cut side down, in a greased baking pan. Cover; let rise until nearly double (about 30 – 45 minutes). Do NOT skip this step.

Place the rolls very close to each other on a baking tray. Bake rolls in a 360 F degrees oven for 25 to 30 minutes or until light brown. If required, to prevent over-browning, cover rolls loosely with foil the last 5 to 10 minutes of baking.

Invert at once onto a wire rack. Cool slightly.

Drizzle rolls with the Sugar Glaze. 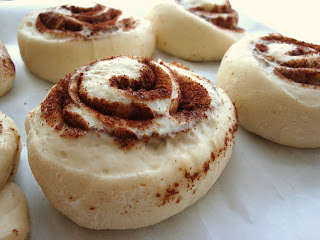 ^I stored this batch in the fridge hoping to bake them the next day. BUT! The dough shrank and wrinkled up crazyyyyy the next morning. It was a heartbreaking sight.

Luckily, the rolls that I managed to bake right away when they were still "fluffy" were not really an utter fail. Good thing a packet of active dry yeast is not quite a full tablespoon.. so I had to open my newly bought Saf Instant Yeast. I believe that teeny bit of instant yeast gave the rolls some height and saved them from becoming hard rocks. 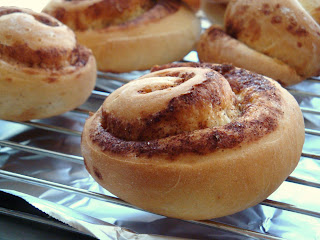 The rolls were hard and crunchy on the outside and moderately soft inside. Edible.. and they were just bagel-like!